"WORLD X DIAGNOSTICS," created in collaboration with Stephanie Rothenberg
2010
Plexiglas, aluminum, wood, steel, solenoids, pneumatic blower, PVC tubing, organ pipes, electronic circuits, Arduino board, touch screen, Macintosh computer
dimensions variable
"WORLD X DIAGNOSTICS," is a conceptual art project that invites the public to evaluate the functioning of civil institutions in their home country following the wake of the 2008 World Financial Crisis. Modeled after the European Values Survey, participant responses are entered into an interactive database that translates this data into sound produced by a responsive sound sculpture. Just as the color coded “terror alert system” within the US is used to diagnose and alert the public to outside threats to “national security,” this project appropriates this operative logic and applies it to threats to economic and social stability caused by the corruption of the socio-political system from within. This project creates a social platform that allows public opinion to be diagnosed and broadcast into the public realm. 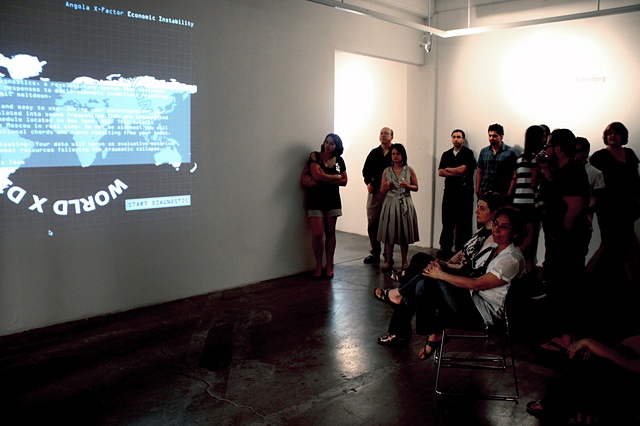